Democratic Rep. Alexandria Ocasio-Cortez from New York posted to Instagram on Friday, telling her followers she would be receiving a manicure in a show of resistance to the Supreme Court’s recent Roe v. Wade decision. Wade.

Representative Ocasio-Cortez explained that “personal acts of reclamation” can serve as personal forms of political protest even though people may feel powerless in light of the recent ruling, according to a tweet that reposted the New York congresswoman’s story:

. @AOC says she is getting her nails done as an act of “resistance” post-Dobbs. pic.twitter.com/jqFA1PyhJk

Wishing followers a happy Friday, Ocasio-Cortez stated in the post that “Joy too can be an act of resistance.” (RELATED: Rust Belt Democrats Silent On Rep. Ocasio-Cortez Endorsements)

“I want to talk about personal acts of reclamation because sometimes people will say there’s nothing I can do…I feel so powerless… And there is no act too small that you can engage in,” the Representative reminded her followers.

“Today I have a personal task: I must redo my nails. AOC stated that she has decided to apply her new manicure almost as a personal act for reclamation of my life and story.

The congresswoman said in a follow up video that her manicure is an act of rebellion because red nails used to be a sign she was “loose” during her conservative childhood. (RELATED: AOC Claims Republicans Criticize Her Because Of ‘Deranged Sexual Frustrations’)

@AOC says she finds red nails empowering because her family was socially conservative and believed they encouraged “loose” behavior. pic.twitter.com/UnSyNzFZfO

Ocasio-Cortez has recently encouraged other acts of “resistance,” and urged protestors to take to the streets during a protest outside of the Supreme Court. On late-night TV, Stephen Colbert with the New York Representative stated that both the legislative and executive branches should keep the Supreme Court under control. 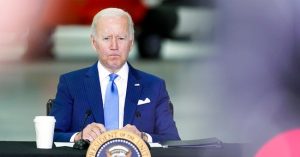