(The opinions expressed in guest op-eds are those of the writer and do not necessarily represent the views of RedState.com.)

This is the headline from an article this morning in Grist, which calls itself a “nonprofit, independent media organization dedicated to telling stories of climate solutions and a just future.” Anyway, here is their headline this morning:

Without Congress, what can Biden do to stem the climate crisis?

And here’s the opening paragraph of the article, written by Diana Kruzman, the “Midwest correspondent.” Her previous work as a freelancer has appeared in Undark, the New York Times, Vice, the Christian Science Monitor, and Religion News Service. So apparently, she’s an actual person who actually gets paid to write this stuff. Here is her opening:

“The White House is scrambling to reassure Democratic voters that President Joe Biden can still take action on climate change after another blow to proposed climate legislation from Senator Joe Manchin of West Virginia.”

The rest of the article, which is a lot of loony-left, green alarmist nitwittery masquerading as trendy journalism, is of course really only to encourage Biden to use his executive authority to shove climate change policies down the throats of the American people.

He should do this in the name of “democracy” they say. After all, Biden won the election, Trump lost the election. And not liking that “fact,” Trump led an “insurrection” to destroy democracy, didn’t you know? There is a Congressional hearing about it on MSNBC. Nobody’s watching, but it’s still happening.

See also  Tim Scott: Abortion will not have a negative impact on the GOP's Midterms performance

According to a Monmouth University Poll taken July 5th, just a couple of weeks ago, when asked, and without listing any issues by the pollsters, the American people told the pollsters what they are concerned about. This isn’t theory, or speculation. This isn’t according to Putin, and it isn’t fake news. This is the political reality in America today.

And as you can see, the only thing the American people seem to care about less than climate change, at least according to this poll, which is a respected poll, is COVID. What they do care about, in order of importance, is: inflation – 33 percent; gas prices – 15 percent; the economy – nine percent; and everyday bills, including groceries – six percent.

But here’s the thing, those top four issues (inflation, gas prices, the economy, and groceries) are essentially the same issue. It’s the economy, stupid. So, if looked at another way, 63 percent of the American people want the focus of this President’s attention to be on improving the economy, stupid.

Moreover, when you add to these four issues: health care costs, job security, college tuition, housing, mortgage and rent, safety, and crime, all those issues being variations of the same issue, the economy, that 63 percent of Americans grows to 75 percent of Americans.

All nine of these concerns of the American people will only be exacerbated if Biden forces upon the country some half-baked scheme to deal with climate change. And if we’ve learned anything about this Administration over the past two years it’s we can’t trust them to change a light bulb in the Roosevelt Room in the White House, let alone reinvent our nation’s entire energy paradigm.

What the free radicals in charge of today’s Democrat Party and running rampant throughout the West Wing should take into consideration as they’re on cable news regurgitating their talking points about insurrection and threat to democracy, is democracy isn’t getting elected and then imposing an extreme agenda that only one percent of voters want but 75 percent of the country doesn’t want.

In fact, maybe insurrection even fits that description better than democracy does. Call it whatever you want, call it “Climate Justice” as they do at Grist, call it “Beast Mode” as that idiot Sen. Sheldon Whitehouse does while sunbathing at his no-colored-people-allowed beach club, but don’t call it democracy.

Joe Armendariz is the Director of Government Affairs for Armendariz Partners. He is a former two-term member of the Carpinteria City Council and the former Executive Director of the Santa Barbara County Taxpayers Association, and Santa Barbara Technology and Industry Association. He is Chairman of the California Center for Public Policy. He can be reached at 805.990-2494 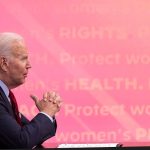