The demand for monkeypox vaccinations has increased steadily in the United States, despite the fact that the Biden administration failed to maintain the supply.

The U.S. Department of Health and Human Services reports that “number of monkeypox vaccination doses in the United States has more then tripled since last Wednesday,” but there is still a shortage.

The virus is not sexually transmissible and spreads only by skin-to-skin contact. However, it has so far primarily affected gay men living in cities like New York City and Washington, D.C. The U.S. Centers for Disease Control and Prevention estimates that more than 1.5 million men have had sex with them and are therefore eligible for the monkeypox vaccination .”

As many as 132,000 doses of the two-dose Jynneos vaccine have been distributed across the nation – not nearly enough to meet the current demand.

Dr. David Holland, chief clinical officer of the Fulton County, Georgia, Board of Health, told CNN that his office received an “allotment of 200 vaccines, and the appointments for that went in about an hour and a half.”

Washington, D.C., received the greatest number of vaccines, closely followed by New York. According to the CDC, vaccine allocations will be based on “number and population at high risk” in a particular area .”

“While we appreciate the approximately 7,000 vaccine doses that have been sent to New York City thus far, and the approximately 14,500 doses we expect to receive by the end of the week, we urgently need far more to slow the spread and protect at-risk populations,” Eric Adams wrote to the administration.

See also  D.C. makes monkeypox dashboard. It will be updated weekly from now on

“Within less than 10 minutes of releasing new appointments for our vaccine clinics last week, all appointments were taken,” he added.

We have very little time to contain this outbreak and prevent it from getting out of control and potentially becoming endemic. We have a vaccine that can prevent monkeypox. Unfortunately, the federal government failed to properly prepare for this outbreak by ordering insufficient vaccine doses.

Vaccination is how we control Monkeypox before it spreads broadly.

The federal government must accelerate the purchase and distribution of vaccines.

We need to promote the vaccine aggressively at local levels.

Working together, we will protect one another. @MattHaneySF & my statement: pic.twitter.com/qAupBRQzO2

” The problem is that we have to provide more vaccines.” Jha stated. We are extremely focused on making sure vaccine doses reach the United States, and that they get to New York City. Do we wish we had more doses? Yes. There was a stockpile and now we have more. More .” 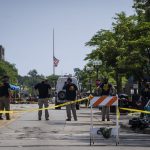