There is no evidence that Kelly has escaped. This claim is based on a humorous account.

Kelly, whose full name is Robert Sylvester Kelly, was recently sentenced to 30-years in prison after his conviction by a New York Jury on sex trafficking and racketeering charges, according to CNN. According to the outlet, he was taken off suicide watch Tuesday after a medical assessment.

An image posted to Facebook shows a screenshot of an Instagram posting that claimed Kelly had escaped prison. This image shows a mugshot and an ABC News photo that seems to depict a tunnel. The star disappeared early in the morning. However, prison officials were able to confirm R Kelly’s escape using security footage from beneath the prison grounds.” the text below the image reads. The claim is false. No such news reports from ABC News or other news outlets state that Kelly had escaped from prison or had been planning to do so. The photo of the alleged escape appears to have been taken from a 2015 ABC News video of a prison break at the Clinton Correctional Facility in New York.

Kelly is being held at the Metropolitan Detention Center (MDC) in Brooklyn, New York, according to Sky News. A search on the Federal Bureau of Prison website shows that Kelly is still being held at MDC. There is no indication of an alleged escape.

Check Your Fact reached out to MDC and received a comment. We will amend this article if we receive one. 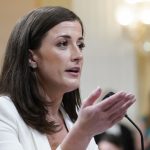 Megyn Kelly: Cassidy Hutchinson’s testimony could be discredited by a first-year student of law