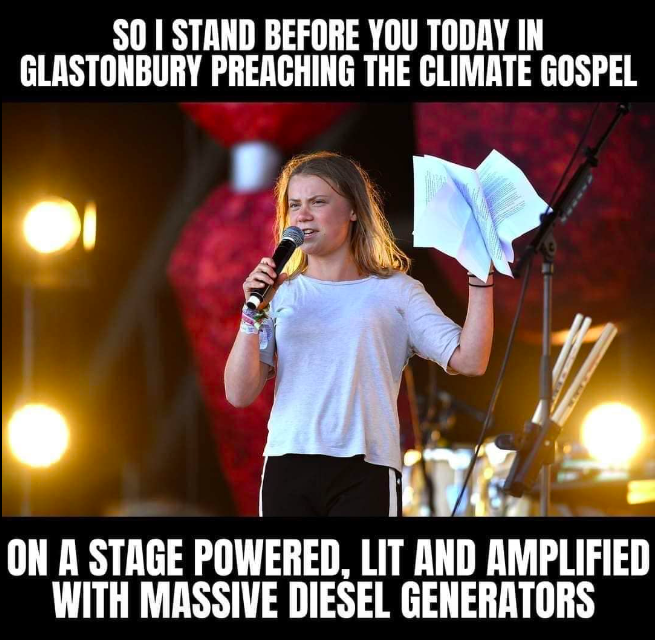 Environmental activist Greta Thunberg delivered a speech at the Glastonbury Festival June 25 in which she criticized world leaders for not doing enough to curb climate change, according to BBC News. A Facebook photo claims that diesel generators power the platform she used to deliver her speech.

The image shows Thunberg speaking at the event and features text that reads, “So I stand before you today in Glastonbury preaching the climate gospel, On a stage powered lit and amplified with massive diesel generators.” (RELATED: Does Joe Biden’s Climate Plan Require Americans To Eat 90% Less Red Meat? )

The claim is incorrect. Check Your Fact found no credible news reports about diesel generators being used to power the festival’s main stage. A spokesperson for the festival told Check Your Fact via email that the stage at the 2022 festival “was entirely powered by HVO fuel (free of palm oil), helping reduce CO2e emissions by up to 90%.”

The festival’s website states the event is held annually at Worthy Farm in the U.K., which installed 1500 square meters of solar panels in 2010, reducing carbon dioxide emissions by 100 tons annually. The website also states the site installed an anaerobic digester in 2018, which converts farm waste into renewable energy that powers the farm and subsequent festival offices.

This isn’t the first misinformation about the festival. Check Your Fact previously corrected a viral post that claimed to show over a million cars supporting Canberra Australia’s “Freedom Convoy” but actually showed the 2019 Glastonbury Festival.

FACTCHECK: Is this image of Chrystia, Canadian Deputy Prime Minister, with a naked man?
InCHECK, Glastonbury