An shared on Facebook shows an article by Global News, a Canadian news outlet. It reports on how the Marines allowed soldiers to wear LGBTQ+ pins in their uniforms. 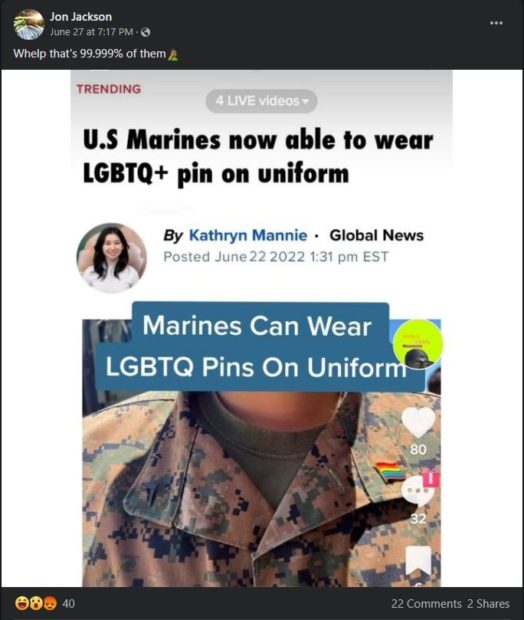 The article is digitally fabricated. The outlet has not published such an article.

The Facebook image appears to show a TikTok video that shares a screen grab of an article from Global News. The article, which was allegedly written and edited by Kathryn Mannie is titled “U.S. Marines now able to wear LGBTQ+ pin on uniform.” The post’s caption claims, “Whelp that’s 99. 999% of them.”

The image is digitally fabricated. No such article appears on the news outlet’s website or social media accounts. There is likewise no record of the post on Mannie’s social media accounts or author page. (RELATED: Did The Atlantic Publish This Article About Joe Biden’s Bike Fall? )

The image appears to be a digitally edited version of a June 2 article titled, “U.S. Mannie wrote the article, “U.S. Marines Under Fire for Tweeting Rainbow Bullets For Pride”.

This image was Photoshopped,” Mannie stated in an email to Check Your Fact. “I did not write this article and the information is fake.”

The image shared on Facebook appears to have been created as a joke by Instagram user @notinregz. The account shared the same fake article in a June 28 Instagram post along with a caption that reads, “I made this fake article and everyone got baited.”

There are no credible news reports suggesting the Marine Corps is now allowing LGBTQ+ pride pins on uniforms. The official Marine Corps Uniform Regulations, published by U.S. Marine Corps Headquarters, state any “articles that are not authorized for wear” should not be present on any uniforms. There is no indication that LGBTQ symbols are “authorized for wear” as they are not mentioned in a 2020 memorandum explaining which flags and symbols are permissible for members of the military to wear.

Check Your Fact reached out to Global News and received a reply.

FACTCHECK: Global News published this article about Tim Hortons segregating children based on their vaccine status.

FACTCHECK: Is this image of Chrystia, Canadian Deputy Prime Minister, with a naked man?
InCHECK, Global